Our first public Marinus Homes project has been handed over!

We have implemented the buildings serving the Danube beach in Budapest; our task included project preparation, design, production and on-site construction.

In the project, Marinus Homes was a general designer and a general contractor for the floating houses. Our team installed two floating premises on the sandy shore of the Lágymányosi Bay-Kopaszi Dam as part of the most monumental district-development in Budapest.

A public park – on the spot, along the bay – was created with a capacity of 500 people.
The development consisted of two complex tasks: the landscape architectural plan of the plot and the design and construction of the structures serving the public park. In the spatial planning, we worked with the co-contractor BMP Építőipari Zrt., according to the plans of the Marinus Homes office.

The challenge was that the buildings, due to their location – a large watercourse – required a unique operation that also included the connected environment and utilities. The area may become submerged due to the intended movement of the water level of the Danube, and in case of flood, the water may raise the buildings even higher.

Accordingly, the floating houses of Budapart were deliberately made with the technological innovations developed for the Marinus Homes floating houses – prefabricated, lightweight superstructures built on elementary concrete floats – their special feature is that in response to the flood, they swim up according to the water level change, therefore they assimilate to the flood. Thus, they need not be lifted from their place by crane in the autumn and winter times. Thereby providing three seasons of direct waterfront life for the given coastline. This adaptability, the buoyancy, requires that the connection of the houses to the infrastructure also adapt to all this, so they are made with unique, flexible electrical and mechanical connections.

In terms of their function, the houses are the waterfront service units of the public park; a bistro premise with staff rooms, a medical room, and an open guest terrace; and a guest building with washbasin blocks and changing rooms, and last but not least a smaller, mobile, porter’s lodge which fits into the scheme.

Budapest, XI. district located in the vicinity of Lágymányosi-Bay, in the XI. district under the topographical number 4042/142 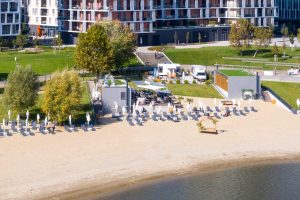 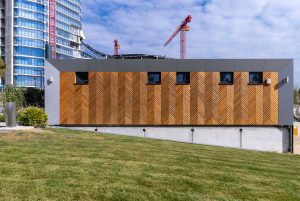 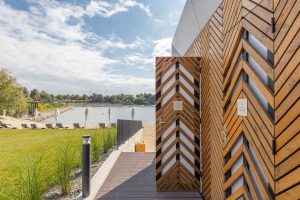 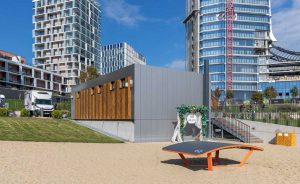 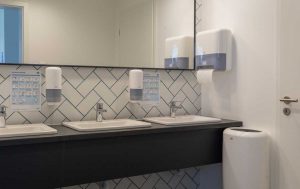 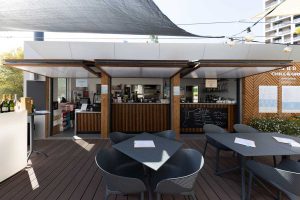 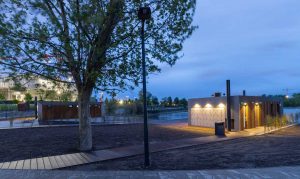 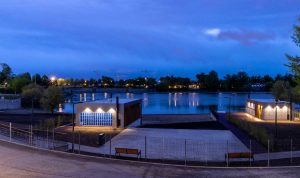